the next big thing is small

This blog post covers material from my 2014-03-28 talk at #APIStrat in Amsterdam. feel free to check out the notes from my talk along with the slides and related videos online. 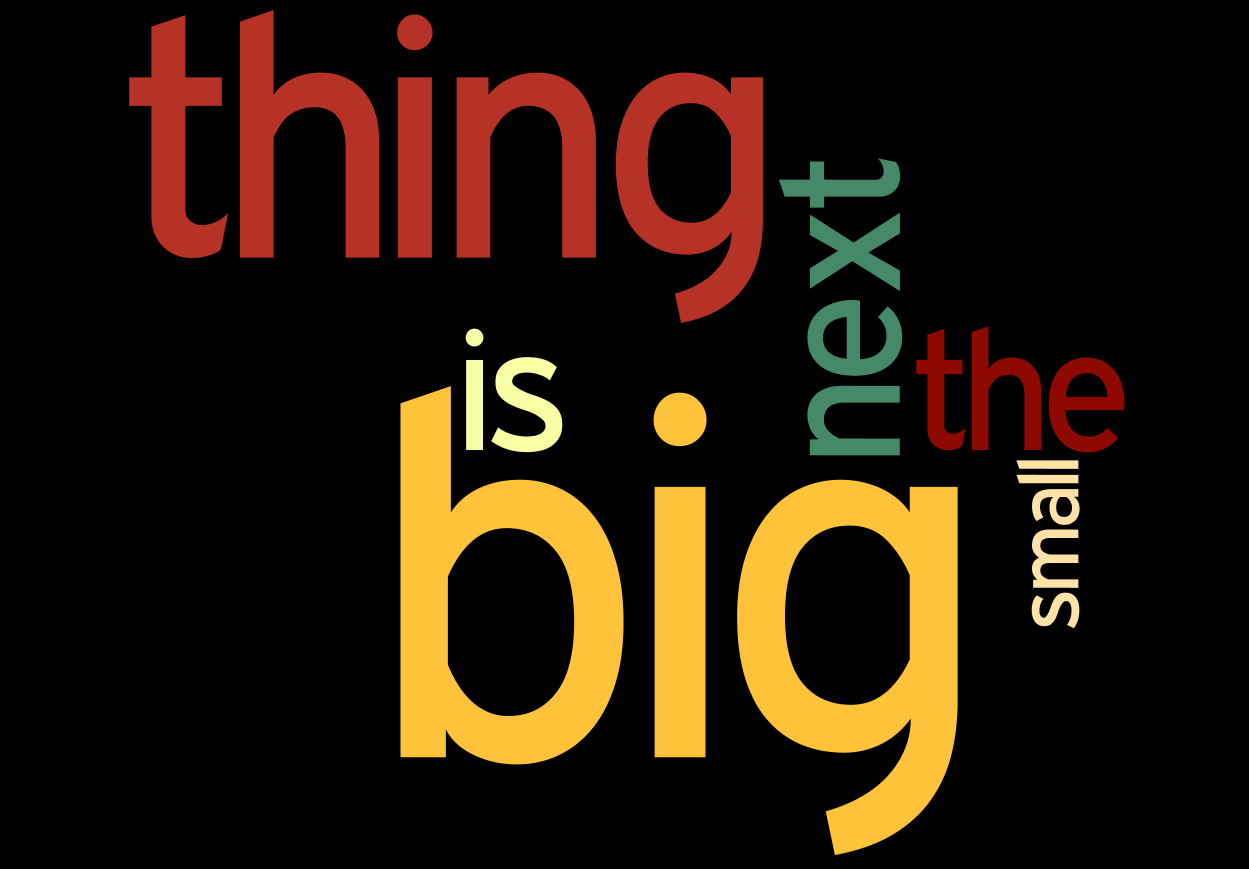 one of the challenges i think we face is the possibility of adding tens of billions of connected devices to the internet in the next few years. currently this Internet of Things is expected to grow from 20 billion connected devices in 2015 to 40 billion in 2020.

that's a lot of things

estimates vary widely, but most agree we have something less than 10 billion connected devices today including computers, handhelds, cars, and controller devices such as SCADA and others. so, adding tens of billions more in just a few short years is going to present some challenges.

a lot of little things

and, if you start to think about wearables, RFID, and micro/nano-size items, you realize that billions of these devices are going to be quite small. not just physically, but also capability and capacity-wise. these will not have the power or flexibility of a laptop or even a handheld mobile phone.

these new members of the "connected community" will be tiny, single-purpose, low-power devices that "do one thing and do it well." and it is likely that program-ability of these devices will be limited. you might be able to flash the memory or even tweak configurations, but a good number of these devices will not be hosts to custom code the way web servers and handhelds are today.

yet, we still need these devices to work together; even if only to publish device data, consume data from others devices and react to outside stimulus (lights on/off, heat, air movement, etc.). so how will we do that? how can we get things to interact w/ each other?

most developers today write "code" by stringing long lists of imperative statments together into a coherent set of instructions for machines. to most devlopers "programming" is just that - providing step-by-step instructions. this means we take on responsibility for any mishaps along the way whether they occur due to problems inherent in our instruction set or due to unexpected events outside our own instrution set such as other devices that do not respond to our requests or send us unexpected data, etc. doing this on tiny devices w/ limited capacity and ability is going to be a problem.

luckily, there is another way to "program" these devices.

we can also use a rules-based approach to programming. in this paradigm, programmers establish a set of coherent rules that tell the device how to respond to outside stimulus ("if the lights are on do X else do Y" or "if the motion detector reports true then turn on the light", etc.). and that is all that you do; you write simple rules and leave the device to it's own.... well, devices.

this means "programs" are much smaller (just a set of rules), easier to debug, and easier to safely modify. it also means the devices themselves don't need to do a great deal of work in order to "act" according to the rules.

how does that help us w/ the IoT?

it seems unlikely that we'll be able to "program" billions of devices to safely and successfully interact with each other if we have to constanly provide step-by-step instructions on how each one operates and how they all inter-operate. instead we'll rely on simple devices that do one thing well and make the history actions available (as a stream of data, occasional dumps, etc.) to other devices authorized for access to this history.

it is also important to keep in mind that these devices will not be "phoning home" asking servers for guidance on how to proceed. the amount of traffic that tens of billions of new devices might generate if they need to constantly get instructions from distant server would be massive and a huge waste of time and bandwidth. instead, most IoT devices will act on thier own, making decisions in real time using the rules provided to them.

so, this is a big deal, right?

this way of thinking about how devices will work, how we will "program" them is a big change for many developers. but not all of them. there are people today who build "low-level" device handlers and other things that do pretty much what i describe here. motion detectors, security systems, etc. all operate on this model (simple rules executed in realtime). the difference we'll see in the near future is that more of us will need to start designing and coding for devices that use this rule-based model.

but yes, this is a big deal.

BTW - i see quite a number of people building "Internet of Things" apps and models still assuming that the devices will be high-powered fully-programmable computers typical of handhelds or laptops today. this is a mistake. while there may be some IoT devices with that profile, i suspect it will be a very small minority of the projected 40 billion devices by 2020.

so start thinking ahead. start planning for a new way to program devices. those who start working like this now will have a jump on their peers and competitors. and there is good reason to start contemplating this right away. rule-based systems will require different training and even different tooling. think about this will affect the "test-driven development" movement and related practices. and that's just one example.

are there examples out there of this "new" kind of programing?

yes, there are. and i'll pick up that thread in another blog post.